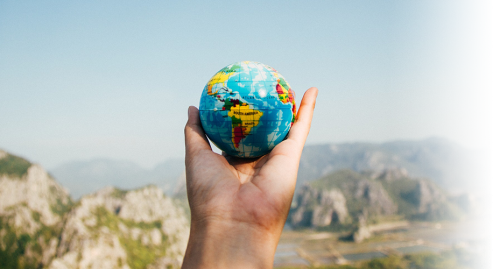 "International regimes are defined as principles, norms, rules, and decision making procedures around which actor expectations converge in a given issue-area. As a starting point, regimes have been conceptualized as intervening variables, standing between basic causal factors and related outcomes and behavior. There are three views about the importance of regimes: conventional structural orientations dismiss regimes as being at best ineffectual; Grotian orientations view regimes as an intimate component of the international system; and modified structural perspectives see regimes as significant only under certain constrained conditions. For Grotian and modified structuralist arguments, which endorse the view that regimes can influence outcomes and behavior, regime development is seen as a function of five basic causal variables: egoistic self-interest, political power, diffuse norms and principles, custom and usage, and knowledge."

"The conceptual, and more recently empirical, study of compliance has become a central preoccupation, and perhaps the fastest growing subfield, in international legal scholarship. The authors seek to question this trend. They argue that looking at the aspirations of international law through the lens of rule compliance leads to inadequate scrutiny and understanding of the diverse complex purposes and projects that multiple actors impose and transpose on international legality, and especially a tendency to oversimplify if not distort the relation of inter-national law to politics. Citing a range of examples from different areas of international law – ranging widely from international trade and investment to international criminal and humanitarian law – the authors seek to show how the concept of compliance (especially viewed as rule observance) is inadequate for understanding how international law has normative effects. A fundamental flaw of compliance studies is that they abstract from the problem of interpretation: interpretation is pervasively determinative of what happens to legal rules when they are out in the world, yet ‘compliance’ studies begin with the notion that there is a stable and agreed meaning to a rule, and we need merely to observe whether it is obeyed."

"Constructing the World Polity brings together in one collection the theoretical ideas of one of the most influential International Relations theorists of our time. These essays, with a new introduction, and comprehensive connective sections, present Ruggie's ideas and their application to critical policy questions of the post-Cold War international order. Themes covered include:* International Organization. How the 'new Institutionalism' differs from the old. The System of States. Explorations of political structure, social time, and territorial space in the world polity. Making History. America and the issue of 'agency' in the post-Cold Was era. NATO and the future transatlantic security community. The United Nations and the collective use of force."

Frames and Consensus Formation in International Relations: The Case of Trafficking in Persons

"This article examines the process of consensus formation by the international community on how to confront the problem of trafficking in persons. We analyze the corpus of UNGA Third Committee resolutions to show that (1) consensus around the issue of how to confront trafficking in persons has increased over time; and (2) the formation of this consensus depends on how the issue is framed. We test our argument by examining the characteristics of resolutions’ sponsors and discursive framing concepts such as crime, human rights, and the strength of enforcement language. We conclude that the consensus formation process in international relations is more aptly described as one of “accommodation” through issue linkage than a process of persuasion."

Volha Charnysh and  Paulette Lloyd and Beth A. Simmons, Frames and Consensus Formation in International Relations: The Case of Trafficking in Persons (2015). European Journal of International Relations, Vol. 21, Pg. 323, 2015; U of Penn Law School, Public Law Research Paper No. 16-39. https://scholar.harvard.edu/bsimmons/publications/frames-and-consensus-formation-international-relations-case-trafficking

Global Prohibition Regimes: The Evolution of Norms in International Society

"The dynamics by which norms emerge and spread in international society have been the subject of strikingly little study. This article focuses on norms that prohibit, both in international law and in the domestic criminal laws of states, the involvement of state and nonstate actors in activities such as piracy, slavery, counterfeiting, drug trafficking, the hijacking of aircraft, and the killing of endangered animal species. It analyzes the manner in which these norms have evolved into and been institutionalized by global prohibition regimes and argues that there are two principal inducements to the formation and promotion of such regimes. The first is the inadequacy of unilateral and bilateral law enforcement measures in the face of criminal activities that transcend national borders. The second is the role of moral and emotional factors related to neither political nor economic advantage but instead involving religious beliefs, humanitarian sentiments, fears, prejudices, paternalism, faith in universalism, the individual conscience, and the compulsion to proselytize. The ultimate success or failure of an international regime in effectively suppressing a particular activity depends, however, not only on the degree of commitment to its norms or the extent of resources devoted to carrying out its goals but also on the vulnerability of the activity to its enforcement measures."

The authors "examine why international actors-including states, firms, and activists-seek different types of legalized arrangements to solve political and substantive problems. [They] show how particular forms of legalization provide superior institutional solutions in different circumstances. [They] begin by examining the baseline advantages of "hard" legalization (that is, precise, legally binding obligations with appropriate third-party delegation). [They] emphasize, however, that actors often prefer softer forms of legalization (that is, various combinations of reduced precision, less stringent obligation, and weaker delegation). Soft legalization has a number of significant advantages, including that it is easier to achieve, provides strategies for dealing with uncertainty, infringes less on sovereignty, and facilitates compromise among differentiated actors. Although [their] approach is largely interest-based, [they] explicitly incorporate the normative elements that are central in law and in recent international relations theorizing. [They] also consider the important role of nonstate actors who, along with states, are central participants in contemporary international legalization. [They] illustrate the advantages of various forms of international legal arrangements with examples drawn from articles in this special issue and elsewhere.

"The first section of this essay defines a few key terms and provides some historical background on the relationship between international law and international relations. The second section discusses the major theoretical approaches, from those that highlight material incentives to those that rest on more ideational foundations. The third section discusses international law development – concepts of legalization, judicialization, constitutionalization, and global administrative law. The fourth section reviews theories and empirical studies of compliance with public international law. The final section concludes that theory has become less compartmentalized by “school” and empirical research has become more rigorous over the past decade."

International Law in a World of Liberal States

“The inquiry in this essay thus begins not with classical international law, but with the dominant positive analytical framework shared by both international lawyers and political scientists - Realism. Part I outlines the basic tenets of Realism and introduces the principal alternative to Realism in international relations scholarship — Liberalism. […] The project here, consistent with an overall commitment to a new generation of interdisciplinary scholarship, is to reimagine international law based on an acceptance of this distinction and an extrapolation of its potential implications. Part II distills various factors that political scientists have correlated with the 'liberal peace', factors that can be translated into assumptions about political and economic relations among liberal States. Part III introduces the concept of a world of liberal States, acknowledging the distance between such a world and the present international system but arguing that the hypothesis may nevertheless describe an important dimension of the current system. Part IV constructs a model of international law based on a hypothetical world of liberal States, integrating assumptions about relations among such States with the broader assumptions of Liberal international relations theory.”

"Judicial globalization, by contrast, describes a much more diverse and messy process of judicial interaction across, above and below borders, exchanging ideas and cooperating in cases involving national as much as international law. This essay sets forth five different categories of judicial interaction: relations between national courts and the European Court of Justice (ECJ) in the European Union (EU); interactions between the European Court of Human Rights and national courts; the emergence of "judicial comity" in transnational litigation; constitutional crossfertilization; and face-to-face meetings among judges around the world. The contexts are very different, involving both "vertical" relations between national and international tribunals and "horizontal" relations across national borders. The factors driving these forms of interaction also vary widely, including a structural provision in an international treaty, the globalization of commerce, and the need for judicial training in many fledgling democracies."