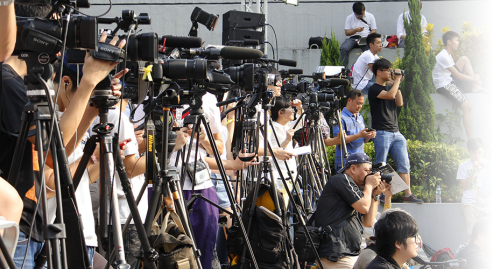 Freedom of the media

This Module focuses on the written press, radio and television broadcasting. The resources are organized according to the two principles that govern Media regulation -diversity and pluralism - and their meaning as applied to different mediums. The Module also includes readings that critically assess the role of the Media and of press freedom in contemporary societies and the digital challenges to the traditional Media business model.

"The press, long enshrined among our most highly cherished institutions, was thought a cornerstone of democracy when its name was boldly inscribed in the Bill of Rights. Freed from governmental restraint, initially by the first amendment and later by the fourteenth, the press was to stand majestically as the champion of new ideas and the watch dog against governmental abuse. Professor Barron finds this conception of the first amendment, perhaps realistic in the eighteenth century heyday of political pamphleteering, essentially romantic in an era marked by extraordinary technological developments in the communications industry. To make viable the time-honored "marketplace" theory, he argues for a twentieth century interpretation of the first amendment which will impose an affirmative responsibility on the monopoly newspaper to act as sounding board for new ideas and old grievances."

Can the GDPR and Freedom of Expression Coexist?

“The General Data Protection Regulation (GDPR) imposes important transparency and accountability requirements on different actors who process personal data. This is great news for the protection of individual data privacy. However, given that “personal information and human stories are the raw material of journalism,” what does the GDPR mean for freedom of expression and especially for journalistic activity? This essay argues that, although EU states seem to have taken their data protection obligations under the GDPR seriously, efforts to balance this against the right to freedom of expression have been more uneven. The essay concludes that it is of key importance to ensure that the GDPR's safeguards for data privacy do not compromise a free press.”

Disease Pandemics and the Freedom of Opinion and Expression

“The present report of the Special Rapporteur on the promotion and protection of the right to freedom of opinion and expression, David Kaye, is being submitted to the Human Rights Council pursuant to Council resolution 34/18. In the report the Special Rapporteur registers alarm that some efforts to combat the coronavirus disease (COVID-19) pandemic may be failing to meet the standards of legality, necessity and proportionality. The Special Rapporteur highlights five areas of concern, showing that access to information, independent media and other free expression rights are critical to meeting the challenges of pandemic.”

Disinformation and Freedom of Opinion and Expression

“In the present report, the Special Rapporteur on the promotion and protection of the right to freedom of opinion and expression examines the threats posed by disinformation to human rights, democratic institutions and development processes. While acknowledging the complexities and challenges posed by disinformation in the digital age, the Special Rapporteur finds that the responses by States and companies have been problematic, inadequate and detrimental to human rights. She calls for multidimensional and multi-stakeholder responses that are well grounded in the international human rights framework and urges companies to review their business model and States to recalibrate their responses to disinformation, enhancing the role of free, independent and diverse media, investing in media and digital literacy, empowering individuals and rebuilding public trust.”

Freedom of Expression and Media in Transition: Studies and Reflections in the Digital Age

“In 2016, UNESCO and the Government of Finland [co-hosted] the World Press Freedom Day’s main event in Helsinki, 3-4 May – for the first time in the Nordic Region. 2016 also marks the 250th anniversary of a Swedish fundamental law – The Freedom of the Press Act. This law prohibited censorship and guaranteed public access to official records, and was the first in the world to do so. Both these celebrations can be seen as appropriate background scenarios to this new book. In 2009, Nordicom published Freedom of Speech Abridged? Cultural, legal and philosophical challenges, an anthology focusing on the traditional concept of individual freedom of expression. A few years later, Nordicom published Freedom of Expression Revisited. Citizenship and journalism in the digital era. The current publication, published by the UNESCO Chair at the University of Gothenburg in collaboration with Nordicom, may be seen as a follow-up to these earlier titles. It is based on research in the Nordic countries, but many of the studies are global in nature and the results of collaborations between researchers from many parts of the world. Several of the articles also contain valuable reflections and second thoughts. It is hoped that these articles by Nordic researchers will contribute to knowledge development in the field as well as to global and regional discussions about freedom of expression, press freedom and the role of journalists, and communication rights in contemporary societies – in an era of globalization and digitization.”

Nordicom, Ulla Carlsson (ed). “Freedom of Expression and Media in Transition: Studies and Reflections in the Digital Age”. 2016. https://www.nordicom.gu.se/sites/default/files/publikationer-hela-pdf/freedom_of_expression_and_media.pdf.