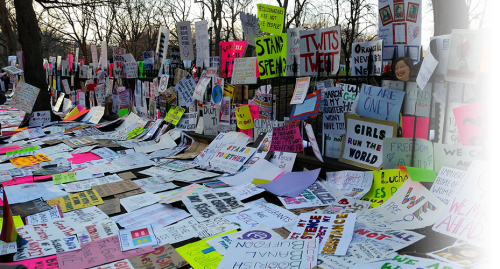 The resources on this Module explore the nature and extent of freedom of expression through a focus on specific speech or speakers, such as political speech, art, or protest.  The readings will demonstrate the existence of a range of standards regarding their protection and regulation, largely enshrined in many regional and country practices, although not all.

Author: UN Human Rights Council, Special Rapporteur on the Promotion and Protection of the Freedom of Opinion and Expression
Media Type Icon

“This research report concerns the right to seek, receive and impart information and ideas of all kinds, regardless of frontiers, and through any media – including in the form of art. As such, it provides an overview of the human rights law framework applicable to artistic freedom of expression, highlights several contemporary instances of threat to artistic freedom, and concludes with a limited number of recommendations for States, private actors and civil society.”

UN Human Rights Council (Forty-Fourth Session), Special Rapporteur on the Promotion and Protection of the Freedom of Opinion and Expression. Artistic Freedom of Expression. A/HRC/44/49/Add.2. July 2020.

Assessing enabling rights: Striking similarities in troubling implementation of the rights to protest and access to information in South Africa

"Many human rights have a dual value in that their realisation is both an important end, and a means to enable the realisation of other rights. The effective implementation of these kinds of rights is thus particularly important for advancing rights-based democracy. However, in practice, the implementation of such rights is often problematic. The article examines access to information and protest as examples of such ‘enabling’ rights. Drawing on the experience of communities and civil society organisations, it identifies and discusses some striking similarities in the way in which the legislation promulgated to give effect to these two rights in South Africa is being implemented, and argues that the problematic implementation of legislation is having the effect of thwarting these rights, rather than promoting them. Further, it argues that the existence of such striking similarities may point to a more systemic problem of civil and political rights failing to enable the realisation of socio-economic rights."

Australia: Freedom of Speech and Insult in the High Court of Australia

The Australian Constitution lacks a comprehensive statement of rights. The few rights which have been judicially recognized by the High Court of Australia have typically been narrowly interpreted. One such right is the freedom of political communication, which is a restricted/limited kind of free speech right. Though the early 1990s witnessed several decisions in which the freedom of speech was protected in fairly expansive ways, the doctrine was revised in 1997 due to growing doubts about its “more adventurous applications” within the Court. In Lange, the affirmation of the doctrine was accompanied by an emphasis on the limits imposed on the right by the text and structure of the Constitution, and the afterlife of Lange until Coleman witnessed the failure of all free speech challenges levelled in the High Court of Australia. In this article, Stone and Evans discuss how the decision in Coleman affirms the survival of the freedom of political communication as well as clarifies several aspects of the doctrine. They highlight that the quashing of Coleman’s conviction is reflective of the rejection of arguments about the legitimacy of the State’s endeavour to mandate civility in political communication. They argue that the Judiciary’s decision reveals a preference for public debate which tolerates insult as well as other forms of uncivil expression, and that such a justification “exposes the fragility of the consensus regarding the legitimacy of the implied freedom established in Lange.”

Stone, Adrienne, and Evans, Simon. “Australia: Freedom of Speech and Insult in the High Court of Australia”. International Journal of Constitutional Law 4, no. 4 (2006): 677-688.

“Citizens United v. FEC has fundamentally reshaped American politics by enshrining into law a radical new conception of what it means to be a democratic participant. The Court strikes down, on freedom of speech grounds, a federal law prohibiting independent political expenditures by unions and corporations. Yet, throughout the approximately 180 pages of opinion, there is strikingly sparse discussion of just what “speech” is. Nor do any of the Justices adequately explore the rationale behind the phrase “corporate speech,” an arguably paradoxical syntactical combination rooted in the Court’s “freedom of expressive association” jurisprudence-a doctrine of relatively recent vintage. Justice Stevens’ passionate dissent is laced throughout with the concession that corporations themselves engage in “speech”-a term that, on its face, would seem to require a human “speaker.” Thus even the dissent implicitly accepts the default position that corporations are potentially eligible for protections clearly designed by the First Amendment’s framers for human beings. Legal academics and journalists of all stripes have likewise blithely accepted the conclusion that there is something called “corporate speech.” In doing so, the dissent and others who find the Citizens United decision troubling have unwittingly and unwisely ceded unnecessary ground. By reifying corporations and imbuing them with the sympathetic qualities of individual American citizens seeking to assert their fundamental First Amendment freedoms, the majority is able to craft an opinion that resembles constitutional common sense. In this article, I examine how the Court ultimately arrives at this destination. In the decades prior to Citizens United, the Court established that associating with others has a close nexus with the textual freedoms of speech and assembly, but the contours of the “right to associate” remained far from clear. I argue that the right to enhance individual expression through association gradually, and without acknowledgement, morphed into a right of the association itself I trace and critique this development, looking closely at Court precedent, the views of the Framers, and the core philosophical underpinnings of free speech. After Citizens United, the fiction of the “corporate speaker,” useful in other contexts, was inappropriately accorded First Amendment status. The result, I argue, is contrary to democratic and republican ideals-allowing corporations and other associations to become potent players in political contests intended for individual citizens.”

Competing Free Speech Values in an Age of Protest

FOAA Online! The right to freedom of association

"The purpose of FOAA Online! is to provide easily accessible legal arguments to assist lawyers, activists and judges involved in freedom of peaceful assembly and freedom of association (FOAA) cases. The site is organized per thematic topic or sub-question in order to direct users as straightforwardly as possible to relevant legal arguments. The FOAA Q&A assists users to link actual facts and incidents to pertinent legal questions. The website focuses on the most widespread issues experienced by those exercising their FOAA rights around the world." To see FOAA Online! in its native Web format, go to: http://freeassembly.net/foaa-online

"Free Expression and Democracy takes on the assumption that limits on free expression will lead to authoritarianism or at least a weakening of democracy. That hypothesis is tested by an examination of issues involving expression and their treatment in countries included on The Economist's list of fully functioning democracies. Generally speaking, other countries allow prohibitions on hate speech, limits on third-party spending on elections, and the protection of children from media influences seen as harmful. Many ban Holocaust denial and the desecration of national symbols. Yet, these other countries all remain democratic, and most of those considered rank more highly than the United States on the democracy index. This book argues that while there may be other cultural values that call for more expansive protection of expression, that protection need not reach the level present in the United States in order to protect the democratic nature of a country."